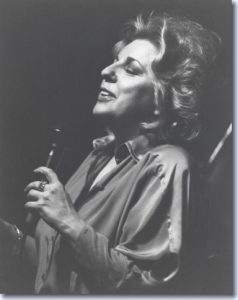 I worked with Art Farmer in the early 1970’s at Ronnie Scott’s in London when I opened for Stan Getz. Ronnie fired Stan after the first week, and called Art in Vienna to finish out the gig. (That’s another story, which is in my book).

I also did a Fri.-Sat. club date with him at a place called Sandy’s in Beverly, MA.  This is the one Bob Mover must have been on.

It was during that gig that his quiet, understated sense of humor shone through:

One night during a chat between sets, I asked him if he liked Opera at all.  He said he did.  “I enjoy seeing a huge soprano singing her heart out over a hundred-piece band (sic), laying flat on her back with a dagger stuck in her chest”.

I was thrilled beyond words when Helen Keane told me he would be on my 1988 “Love You Madly” album for Contemporary.  And of course, his gorgeous sound made the project extra special.

One little note:  During the years when Jimmy Rowles and I were together, Jimmy once mused that Art should record an album titled “Art Farmer – A Man Outstanding In His Field.”