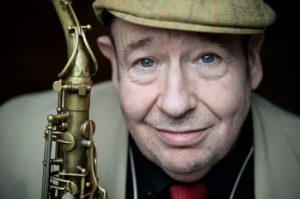 It was 1976, I think. It might have been ’77, but let’s say ‘76. I had been in Boston for a week working a club called Debby’s where I brought Tom Harrell up to play with me. We had a quintet. And we used local guys, Ray Santisi on piano, who was known as Muzzy, and we used a local bass player, Charlie LaChapelle, and Joe Hunt on drums. Muzzy and I bonded on the gig. We had a really nice time discussing changes, harmony, musicians and everything and he asked if I was going home to New York. And I said, “Actually, I’m going to stay a few days, see my dad, hang out in Boston.” He said, “Well you know, I’m working with Art Farmer next week over at Sandy’s, in Beverly.” I said, “Wow, man, I always wanted to meet Art Farmer! He’s one of my favorites!” So he said, “Why don’t you come, man, he’d love you. I’ll bring you to sit in with him.” I was 24 years old or so. I said, “Wonderful, sure!”

So Muzzy brought me down to Beverly, to Sandy’s, the club there and I brought my horn. I sat there the whole night and he [Art Farmer] didn’t ask me to play until Muzzy reminded him before the last tune “My friend is here.” He was opposite Carol Sloane. She was doing sets. He would play and she would do a few tunes. The same rhythm section played. Anyway, finally he called me up to play the last tune of the night which was a tune called “Cascavelo.” It has an unusual bar structure. I can’t remember if it’s 54 or 56, but it has a very unusual structure to it and fortunately, I had the record that it came from which was Homecoming. But I hadn’t learned that tune. I had heard a lot of Art’s repertoire. I do like a lot of the Benny Golson tunes, all the obscure standards, “Too Late Now,” “I’ll Take Romance,” and the beautiful tunes he would play. But I didn’t know this one. It goes through a lot of keys and I think he stuck a concert part in front of me or something and said to read it and transpose it to the alto and I’m really not that kind of a cat. I do my best. I can’t even remember if he gave me music, actually. But anyway, we played that tune and fortunately, I’d heard it enough to know where it began and ended. So my solo was kind of a mess, just trying to figure out those keys. It was drag, you know. That was the last tune of the night, too. [In a similar incident with Mingus,] Mingus called “Reincarnation of a Love Bird” but once I got through that, then he called a blues and let me relax. But this wasn’t even that. It was just playing that tune, kind of like getting rid of me, you know.

So Ray was giving us all a ride back. He was driving Carol and Art to the hotel and I had a lady named Julia. But before we got to the car, I walked up to him and I said, “You know, Mister Farmer, you’re one of my favorite trumpet players and you’re still gonna be one of my favorite trumpet players, and flugelhorn players, but I’m really disappointed and upset if your character is like this. What you did to me really, I don’t think it was really right, man. You don’t just call me up perfunctorily and have me play a tune that I really didn’t know when I know a lot of your tunes. I know a lot of your repertoire. I could have played any of the Golson things. So I’m kind of disappointed in you as a person. Musically I’m not disappointed, but the person I thought you were from your playing I thought would be bigger than that.” And he looked at me with those big, brown eyes, puppy-dog eyes, and he said, “Man, you’re right! I don’t know why I did that to you. It really was wrong, wasn’t it?” I said, “Yeah, it wasn’t nice! I don’t think it proved anything. You still didn’t really let me play. I did my best.” He said, “Yeah, man, I shouldn’t have done that. I don’t know what got into me there. Why don’t you come back tomorrow night and play the whole night with me.” 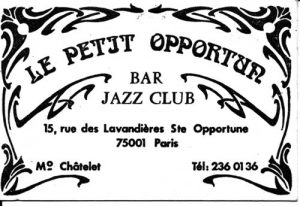 So I went back the next night, and then over the years I played with him a few times. One time in Belgium a guy arranged a tour, actually a few concerts for us together. That was really nice. And when he was in Paris, at Le Petit Opportun, he often played there, he once told me that it was really nice that I would come down because he was doing 3 sets so by the last set, he was ready for some help. I was spending a lot of time in Paris in those days. I had a girlfriend in Paris and I would spend days off there, so if Art was around, I’d go in and play with him. And that’s when he said, “Whenever I’m playing, don’t even worry; just get out your horn and come on up. You don’t have to ask.” And one night I remember we played “Salute to the Band Box” and he said to me, “You sound good! No, you sound great!” That meant a lot to me.

One other experience with him was very interesting. One of my great loves was in Paris and she was married. But we were hanging out all day and finally around 11 o’clock at night she said, “I’d love to hear you play now.” And I said, “Well it just so happens that my friend Art Farmer is at Le Petit Opportun which is right on your way home. So why don’t we go by and I’ll sit in?” So I did and when the ballad came around, he saw the lady and he saw me (she was quite a stunning lady), he said, “So what do you want to play?” And I said, “My Foolish Heart.” And he looked at me again with those puppy-dog eyes and said, “Are you sure?” And he didn’t elaborate but after the gig he said, “You really like her and she likes you.” I said, “Seems to be like that, but she’s married.” And he had a very sympathetic look cross his face like he’d had a similar experience in that situation.

Once you got him to open up – he was initially kind of reserved – he was still reserved but he was very articulate. One night we were playing in Belgium and the local band just wouldn’t get off the stage. They played about 40 minutes too long and we were there backstage and he told me all kinds of wonderful stories about being on the road, and Clifford Brown, and George Russell, what he’d gotten from that. He was a sweet cat. He told me to call Helen Keane [Farmer’s manager] in America. But she was very rude to me, so I never did get to work with him regularly.

I asked him once about being influenced by Frank Sinatra because a lot of the tunes he did, Sinatra did. And he said, “Of course, Sinatra is very important but I get things from a lot of singers, Tony Bennett, and Nat Cole and of course, the female vocalists.” He stressed the importance of listening to vocalists, which I do too. And I think that was the key to Art’s playing because he was such a vocal player. To me he had just the right blend of feeling without being emotional, which is very hard to do. Emotion is so easy to conjure and feeling is so hard to reach. So to me, that was the strongest thing about him, that he could bring tears to your eyes, man, without being sloppy. Kenny Dorham had that quality too; Johnny Coles as well. Those guys all had this kind of underplayed trumpet thing. But then Art, all of a sudden, would start playing those high notes on the flugelhorn. He always sounded like a dynamo that was contained. And I loved the way he used his energy, the linear way that he played and he was a real poet, musically. Everything he played had a rhyme to it.

I brought Tom Harrell to meet him one night. They had never met. I introduced them and I remember Tom hadn’t brought a horn. And Art said, “He’s great trumpet player!” And I said, “Ask him if wants to sit in.” It was at Boomer’s. And Art said he [Harrell] could play his horn. He was very enthusiastic about Tom.

And also Art’s taste in songs: he was a real tunesmith like Sonny Rollins and Ira Sullivan, Basie and all these people really know songs. So I learned a lot. He didn’t just play chord changes. He played something that was really compositional and linear.