In July 1958 I got a call from Gerry Mulligan to rejoin his quartet. Joe Benjamin had replaced me when I left, and then Henry Grimes had replaced him. Now Henry was leaving to go with Sonny Rollins. Dave Bailey was still Gerry’s drummer, and Art Farmer had just joined him on trumpet. I liked Art and admired his playing tremendously. We just had time for one rehearsal before our first appearance at Newport…. 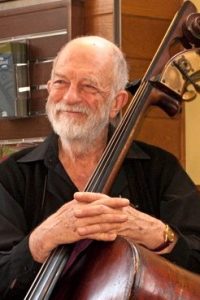 Mulligan had been thinking about band uniforms for the quartet. When Brookmeyer had been with us, we wore sport jackets from the Andover Shop in Boston. For the new group, Gerry sent us to Breidbart’s on Sixth Avenue, a men’s store favored by stylish dancers like Geoffrey Holder and Sammy Davis, Jr. The grey suits we bought there were sharp, but proved to be too warm for outdoor summer concerts. Gerry decided we needed something lighter and less formal. He took us back to Breidbart’s and chose some royal blue linen trousers and short-sleeved gingham shirts with half-inch vertical red and white stripes. He added a touch of formality with black shoestring ties.

Dave and Art both had a little more meat on their bones than Gerry and I did, and their pants fit them very snugly. This was before macho pop singers made tight pants commonplace. When we showed up at the Great South Bay Festival on Long Island wearing our new outfits, Dizzy Gillespie discovered us backstage. He lifted his eyebrows dramatically.

“Will you look at these fools!” he cried, walking all around us to get a better view. He told Dave and Art,

“You better not turn your backs when you get out on stage. You’ll freak those little girls in the audience. You cats got some buns back there!”

I think Art and Dave were glad when the summer season ended, and we went back to wearing our grey suits….

I enjoyed Art Farmer’s company on the road. He had a quiet nature and was very serious about his music, but he also liked to laugh. He sometimes entertained me with stories about the bands of his youth. He told me about working with Johnny Otis’s band, and backing up Joe Turner, the great blues singer. At that time Art was infatuated with Dizzy Gillespie’s playing, and he thought Joe Turner was old-fashioned. Art said he didn’t appreciate Joe until years later.

Joe wasn’t too thrilled with Art, either. Art said, after he took a Gillespie-like chorus one night, Joe sang a new blues lyric:

“Play me the boogie, don’t play no be-bop for me!”

Turner’s influence on Farmer surfaced one night when we were driving home from a gig in Philadelphia. We stopped for coffee at a Howard Johnson’s on the New Jersey Turnpike. The restaurant was empty and the counter girl was in the kitchen, chatting with the cook. A microphone for calling orders from counter to kitchen was mounted on a flexible arm near the cash register, and Art pulled it over. I thought he was just going to ask for some service. But Art put his lips to the mike and sang, just like Joe Turner,

“Well, it was early one Monday morning, and I was on my way to school…”

Though it had been years since Gerry and Chet Baker had worked together, many fans of Gerry’s early quartet records still expected to see Chet when they came to hear us. While we were playing at Storyville in Boston, two college boys came up to the bandstand. One of them asked Art Farmer for his autograph and Art obliged, but when the guy read his signature, he said,

He started to rip up the slip of paper.

“Don’t tear it up!” exclaimed his friend, “He may be somebody too, someday!”…

In late 1958 we began recording an album for Columbia Records. Gerry complained that he couldn’t write anything at home because the telephone and the doorbell were always ringing. I gave him the key to my Cornelia Street apartment and told him,

“There’s a piano there, and nobody will bother you. I’ll be over at Aileen’s place tonight. Go write something.”

He did, and came to the last session with a lovely treatment of “What Is There To Say?” which became the title song of the album. Gerry had asked the rest of us to bring in tunes, so Art and I each wrote one. Art’s was an untitled blues. Since Newport had been our first job together, Gerry suggested the title “Blueport.”

Art had told me that “Buckethead” had been his childhood nickname, so I wrote that at the top of my tune, another blues, in three-quarter time. When Art looked at the trumpet part I handed him, he laughed and said,

“How about `News from Blueport?'” Gerry offered. A spoonerism on “Blues from Newport.” That became the title. The liner notes erroneously listed Gerry as the composer of both tunes, but Art and I receive the royalties…

Composer Edgar Varese had someone assemble a group of jazz musicians at Greenwich House one afternoon to experiment with a new form of composition he had devised. There was one of each instrument: me on bass, Ed Shaugnessy on drums, Don Butterfield on tuba, Teddy Charles on vibes, Art Farmer on trumpet, Eddie Bert on trombone, Teo Macero on tenor sax, and a one or two others that I can’t remember. Varese explained that as the composer, his only control of the music would be choosing who was to play when, and for how long. He wanted us to improvise freely within the time parameters he would give us. He said he had chosen jazz musicians because he felt that classically trained musicians weren’t “free enough.”

Varese pulled out a stop watch and a note pad that contained his composition. He announced something like this:

With Varese keeping track of the seconds, the various combinations of instrumentalists he had chosen began to improvise tentatively. We listened to each other and invented phrases that related to what we heard each other playing. Varese looked disappointed.

“You’re being too careful,” he said. “Let’s try it again, and this time, take more chances. Play wilder. Play high, low, loud, soft. Use the entire capability of your instruments.”

“I haven’t used the entire capability of this trumpet in fifteen years of playing it! And this cat wants me to do it in fifteen seconds!”

And from “Jazz Anecdotes” (same publisher):

Gene Lees asked Art Farmer about his twin brother Addison. “How do you tell yourselves apart?” Without a trace of a smile, Art replied,