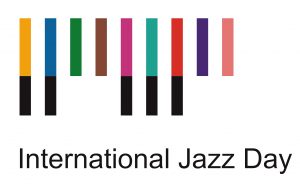 Connections exist among the three: Farmer performed frequently at Jazzland and Schapowalow photographed Farmer on at least one occasion. 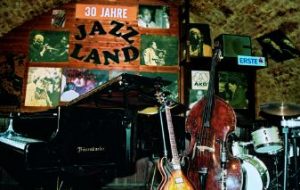 In 1972 Axel Melhardt opened the club in a 500 year old cellar at 29 Franz Josefs – Kai, below St. Rupert’s church. Axel and his wife Tilly, continue as the proprietors. Now the oldest jazz club in Austria, Jazzland developed into “THE” place for Jazz in Vienna. As stated on the website: “Our abiding wish here at Jazzland remains unchanged: to present the whole spectrum of jazz from strict, precisely structured forms to total freedom. Indeed, even those aspects and styles usually overlooked or neglected in these accelerated times get new and careful attention on our bandstand.” In Axel Melhardt’s book Geschichte und G’schichtln – 20 Years of Jazzland, pictures and stories of many major American jazz legends and European jazz stars who have performed in this club are celebrated.

Over the 30 years that Art Farmer lived in Vienna, he would appear twice a year at Jazzland for a week in August and December. It became his “homebase” and the club held birthday celebrations for him in August. (Note: The “rarities” section of the Jazzland website provides interviews and photos of Art Farmer.) Over time, Art Farmer’s “European Quintet” evolved and was ultimately comprised of Harry Sokal (Austria, b. 1954) tenor and soprano sax; Fritz Pauer (Austria, 1943-2012) piano; Paulo Cardoso (Brazil, 1953-2018) bass and Mario Gonzi (Austria, b. 1966) drums.

In 1998 they recorded the CD, Art Farmer Quintet Live at Jazzland.

Art Farmer as Diplomat for Jazz

Like many American jazz musicians, Farmer performed throughout the world over his 50-year career, entertaining, communicating and spreading good will through his country’s unique art form, jazz. He spent thirty years living in Europe and specifically Vienna where he became recognized for his characteristically lyrical playing and soft spoken nature. He was so beloved by the people of Austria that he received two awards: The Austrian Gold Medal of Merit in June 1994 and then in 1998, in honor of his 70th birthday, the highest award in Austria, Austrian Cross of Honor for Science and Art, First Class, presented by Austrian President Thomas Klestil (1932 – 2004).

He was very proud of his two medals and Art’s eyes would sparkle when he would say the name of his highest award to someone and after saying “First Class” he would give a quick wink!

Art was also highly respected at the Hochschule fur Musik und Darstellende Kunst in Graz, Austria. On January 22, 1998, Art was given honorary membership at a special event at the school. The printed program for the event shows that the jazz ensemble performed Gigi Gryce’s “Wildwood,” Benny Golson’s “Killer Joe,” “Tune for Art” – written in honor of Art by Fritz Pauer and “Work of Art” – co-composed by Art Farmer and Quincy Jones. 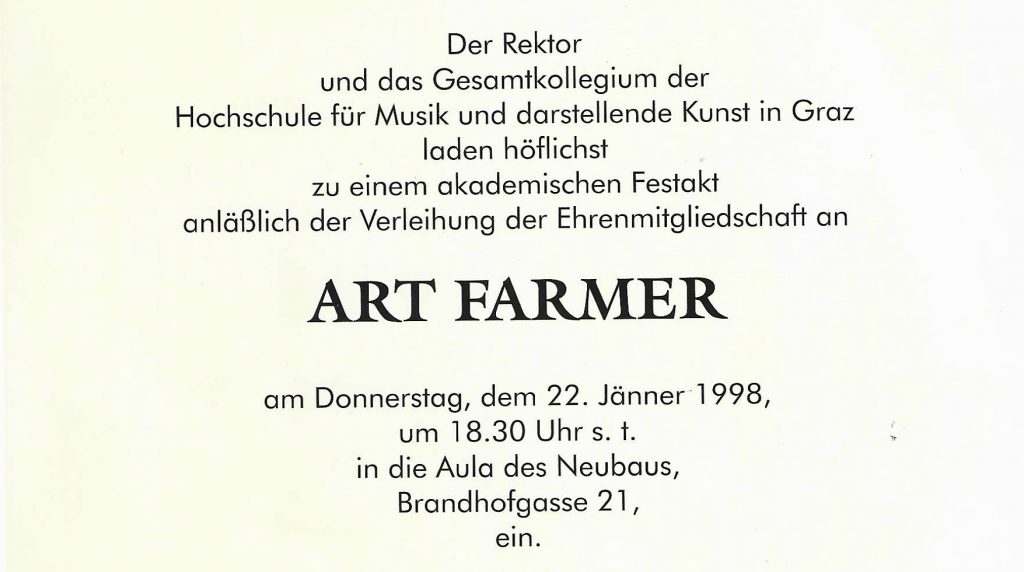 History of Art Farmer in Europe

Between 1959 and 1966, Farmer returned to the European continent frequently with the Gerry Mulligan Quartet (1958-1959) as well as his own Quartet with guitarist Jim Hall (1964). Susanne Schapowalow photographed Gerry Mulligan and Art Farmer during a Jazz at the Philharmonic concert in Hamburg, Germany in 1959. In Stockholm, Farmer’s quartet recorded interpretations of Swedish folk songs which were issued on the Atlantic Records album, To Sweden with Love. In addition to Stockholm, during this period he performed in Copenhagen, Hilversum, Rome, Hamburg and London and participated in studio work with Oliver Nelson and NDR (North German Broadcasting) ensembles. 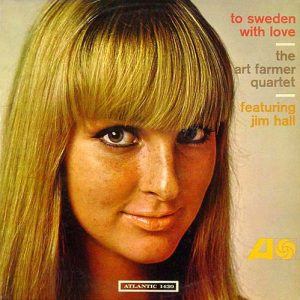 Art’s transition from New York City to Vienna was initiated in 1966 when pianist-composer Friedrich Gulda – “the Leonard Bernstein of Vienna” – created an international competition for modern jazz soloists, ages 15 to 25. Art was asked to be a member of the jury sextet which comprised a truly impressive lineup: Art Farmer (flugelhorn), J. J. Johnson (trombone), Julian “Cannonball” Adderley (alto sax), Josef Zawinul (piano), Ron Carter (bass) and Mel Lewis (drums). The event took place in May and included 40 musicians in the finals. One of the winners of the competition was 22-year old pianist Friedrich “Fritz” Pauer who would later become a key member of Farmer’s “European Quintet.”

Art Farmer’s move to Vienna came in 1968 and was prompted by an offer to join the ORF Big Band (Austrian Radio Orchestra) and have steady employment working 10 days per month. Social unrest and changes in the U.S music scene were also factors in Farmer’s decision to relocate. The ORF schedule was sufficiently flexible for Art to also have gigs throughout the world, often with other American ex-patriots.

Art met and married Mechtilde Lawgger, manager of a bank located in the Vienna International Centre (UNO City). They lived in the “up market” 18th District and raised sons, Georg and Martin.

In the 1970s, the ORF Big Band recorded a series of 12-inch LPs all entitled “ORF Arbeitsplatte” (work discs). These were not commercial products but rather, transcriptions for radio broadcast. Now considered rare and valuable, these LPs are documented on the Discogs website. The personnel, probably a core group of band members who were augmented by unidentified backup musicians, are consistent and include Art Farmer on many of the recordings. These can be heard by listening to tracks from these LPs that have been uploaded to YouTube. Farmer is present on 30 of them between 1972 and 1977. Leaders identified for the various recording sessions include Johannes Fehring, Karel Krautgartner, Ernst Kugler, Erich Kleinschuster and Roland Kovac.

Art recorded with a wide variety of artists, some internationally recognized and others more locally known. Click here to see a compilation of the nearly 60 commercially released albums featuring Art Farmer as leader, co-leader or featured artist recorded outside of the United States.

Recognition of Art Farmer in the United States

Although Art resided primarily in Vienna over the last three decades of his life, he did make frequent trips to the United States and eventually had an apartment in New York City. His career as a diplomat of jazz was also recognized in the U.S. In January 1999, Art received the NEA Jazz Master – American Jazz Masters Fellowship by the National Endowment for the Arts in a presentation at the International Association of Jazz Educators Conference in California. Prior to that, he had been given a Salute at the New York Brass Conference for Scholarships in 1989, and in 1998 he was inducted into the American Jazz Hall of Fame by the New Jersey Jazz Society and Institute of Jazz Studies. Posthumously, he was inducted into the Big Band and Jazz Hall of Fame in 2001 in California.

In her book, Born Under the Sign of Jazz, Norwegian Jazz impresaria Randi Hultin whose home in Oslo was “a home away from home” for many American jazz musicians when on tour in Europe, described Farmer as “a gentleman of jazz, composed and intelligent…open and well-mannered with a warm sense of humor. He is also among the most dependable letter writers.”

Art Farmer’s  unique style and elegant manner of creating solos had a significant impact on 20th century jazz. Much of his legacy was developed as an American living and working in Vienna for three decades. Certainly, he is remembered and revered worldwide.

Many thanks to Fran Eve Wright, Programme Director UNESCO Club Vienna and Secretary General of EFUCA Austrian Federation for inviting us to participate in International Jazz Day 2022.

And thanks also to Wim van Zon of Music Inspired Art and the webmaster of Susanne Schapowalow’s website for providing photos and important information.

We are grateful to curator Dr. David Demsey for access to photos and information from the Art Farmer Collection housed at Living Jazz Archives at William Paterson University in Wayne, New Jersey, USA.