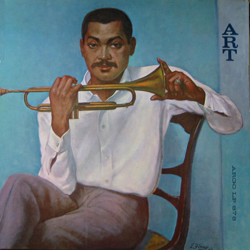 Art Farmer was one of those jazz musicians who never seemed to play a wrong note. Spanning a performing career of 50 years, his lyrical and elegant solos have graced the recordings of a wide spectrum of artists as well as many under his own leadership. He worked with the very best players in both the United States and Europe, where he lived for many years (Vienna). Farmer survived the stylistic turmoil of the 1960s and beyond, and although he was occasionally persuaded to move in commercial directions, he never lost the essential and recognizable qualities that have characterized his playing on trumpet, flugelhorn and, in the 1990s, the flumpet hybrid horn.

It was when I was first getting into jazz music as a teenager that I heard his recordings, notably those on the Prestige label. They left a lasting impression. Upon learning that this website was being assembled, I felt compelled to volunteer my services with the goal of compiling a complete Art Farmer discography using Steve Albin’s BRIAN software. But this would be no small undertaking given the fact that over 500 individual sessions would have to be dealt with.

There was some help available. Several sessions were already in my database through my work on saxophonists Gigi Gryce and Lucky Thompson. More significantly, Michael Fitzgerald, my colleague and co-author of “Rat Race Blues: The Musical Life of Gigi Gryce,” had entered many Farmer sessions from his personal collection and Jazztet project* into his BRIAN database. Through the assistance of Steve Albin, these sessions were imported into my database, saving considerable time. I thank both Steve and Mike for their cooperation in this regard.

*The Fitzgerald Jazztet discography formerly found at JazzDiscography has been incorporated into parts 2 and 4 of this one.

The Art Farmer Discography is divided into four time periods:

I have entered solo information wherever possible.

One problem I have encountered is getting my hands on some very rare recordings. They are listed below. If anyone owns any of these and would be willing to assist this project, please contact me.

I am very grateful to Lynne Mueller for supporting this endeavor.